I’m saying my house is dirty. I spend too much money eating out. I have so many fucking shows to catch up on, it’s sad. And

I even watch TV when I’m at the gym.

I guess it would be different if I was an athlete. It’s already been well established that my gym routine is not the least bit challenging.

Maybe I should just stop going. I just get pissed off at everyone and all I do is use the treadmill. I have a treadmill at home. I still haven’t taken one class. If it wasn’t for that damn pool, and the whirlpool, and the steam room. I’m wasting time and money under the illusion of being healthy.

I could probably get the same results from staying home and cleaning my house and not eating out. Although, no, that’s not true. No matter where I eat it’s probably way less calories than what I would make af home.

Momma likes to go back for seconds and for thards.

Also, my house probably isn’t that dirty. Maybe the initial clean up would burn some calories but on a day to day, probably not.

I watch YouTube clips where women younger than me are just really killing it in the gym and they look great. I will never look that good. I’m fine with that. At a certain point you have to ask yourself, “Do I want to be a size 2 with washboard abs but I can’t eat candy and I have to practically kill myself in the gym 5X a week, or would I rather be a size eight and walk on the treadmill for an hour and half and then go eat a cheesesteak?” 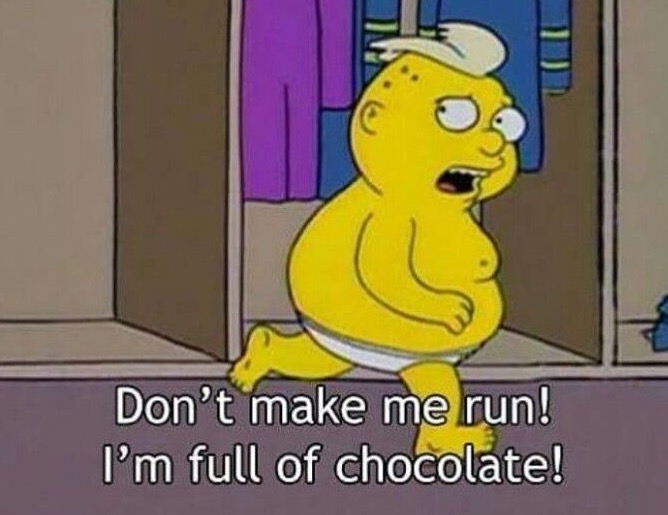 I think we all know my answer to that.

The sick thing is that some people actually enjoy working out? Can you even believe that? They wouldn’t even eat a Twix if they needed to gain weight because it’s not good for them. They treat their bodies like temples. Could you even imagine the thought process behind that?

My best friend, Jessica, I met when we were 15. She was as punk rock as they come. She was obsessed with The Ramones, The Sex Pistols, Iggy Pop and David Bowie. She used to carve Sid Loves Nancy into her skin. She loved the Velvet Underground and Andy Warhol. Now she’s a librarian and a vegetarian. She is in an accountability group on Facebook. They record their workouts and post them online. It’s Basic beyond belief. She is more than my best friend. She is my sister but wtf? Not me. I may be in total denial of my age but I refuse to dress like an old person. This is no shade against her. She is being her authentic self. She is no doubt more enlightened than I am but I’m wearing skinny jeans and lucky brand and free people as long as they fit. I just layer them now. It’s sad but it’s who I am.

I’m off on a tangent but that’s just because I had some rum. No gym tonight. I love everyone. Good night.